Heineken Experience
The Heineken Experience is an attraction located at Heineken’s first built brewery near Amsterdam’s city center. In 1988, the brewery was closed due to the inability to meet the high demand. Nowadays, you can learn about Heineken’s heritage, brewing process, innovations, sponsorships and what it takes to serve a star in a 1.5 hour self-guided tour. At the end of the tour you can enjoy two Heinekens. Heineken is well known for its signature green bottle and red star.

The attraction grew to become one of Amsterdam’s most popular tourist attractions and by 2001 the visitor center changed its name to Heineken Experience. After a year of extensive remodeling and expansion, the Heineken Experience reopened to visitors on November 3, 2008. The latest transformation of the visitor experience comprises four levels of historical artifacts, product exploration and sampling, and interactive exhibits which employ the latest high-tech multi-media technologies.

Public Transport Options
There are many public transport options, which can make it slightly confusing. The one which is the best for you, depends on your starting point (e.g. hotel or railway station). You can reach the Heineken Experience directly or with just 1 transfer from 9 railway stations in the Amsterdam area and also from Amsterdam Airport Schiphol. The map below shows the main tram and metro stops near the Heineken Experience. 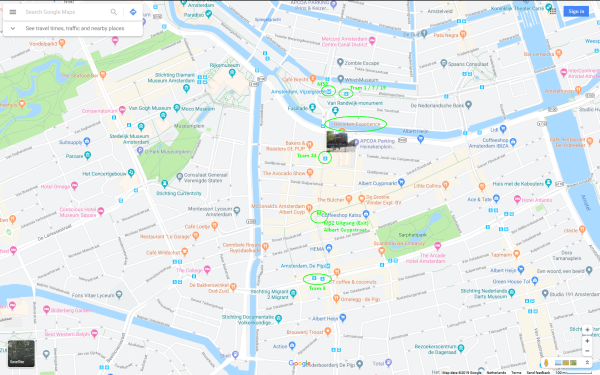 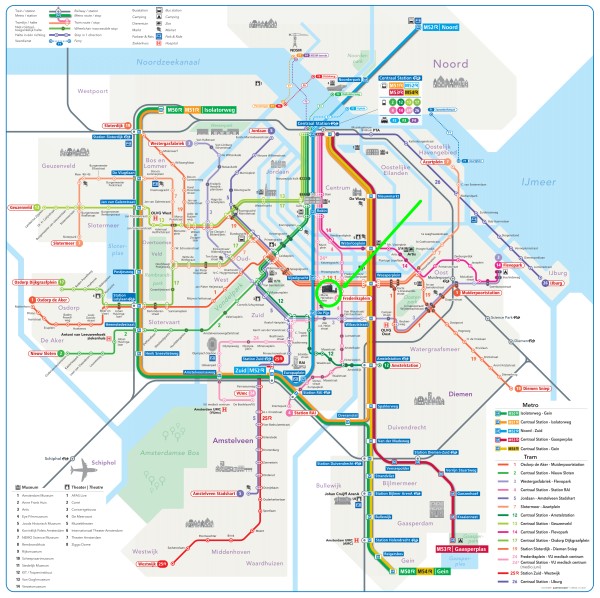 
Metro 52 (Noord/Zuidlijn)
The easiest and fastest way to travel to the Heineken Experience is by metro 52 (Noord/Zuidlijn). This is Amsterdam’s latest metro line running from the northern part of Amsterdam under the IJ River, passing Amsterdam Centraal station, the city center, and down to Amsterdam Zuid station. The 9.2km-long line officially opened on July 22, 2018. In just 15 minutes, passengers can travel the 10km journey, with stops at Noorderpark Station on the north of the IJ River, Amsterdam Central, Rokin, Vijzelgracht, De Pijp and Europaplein. The efficient service runs every six minutes during the day and every seven to eight minutes in the evening.

Make sure you travel in the right direction. Use the metro map below to determine whether you have to take metro 52 in the north or south direction. 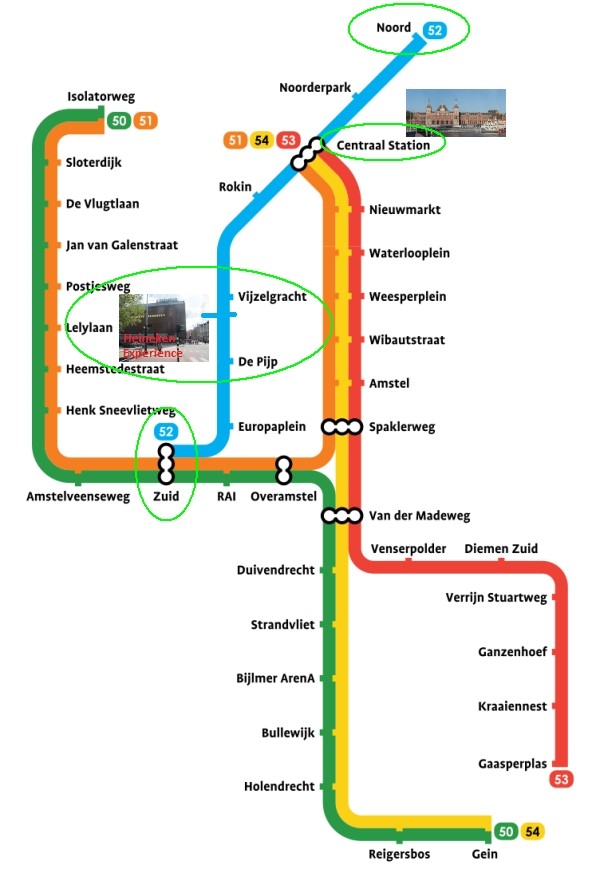 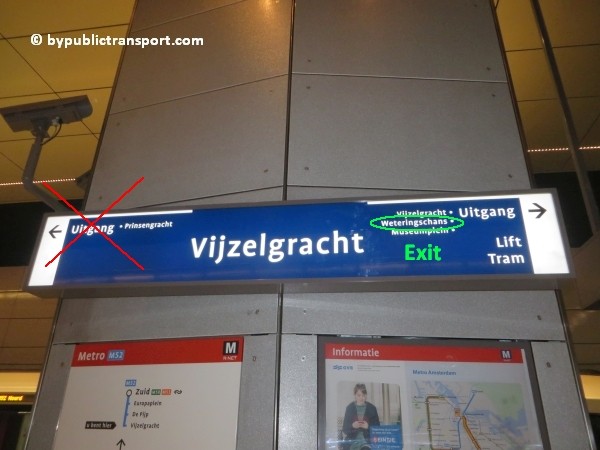 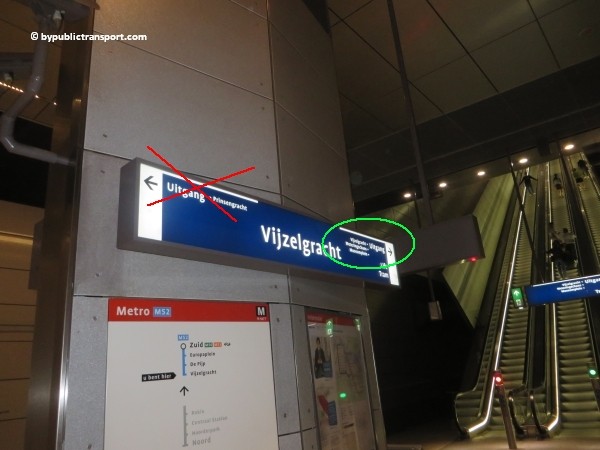 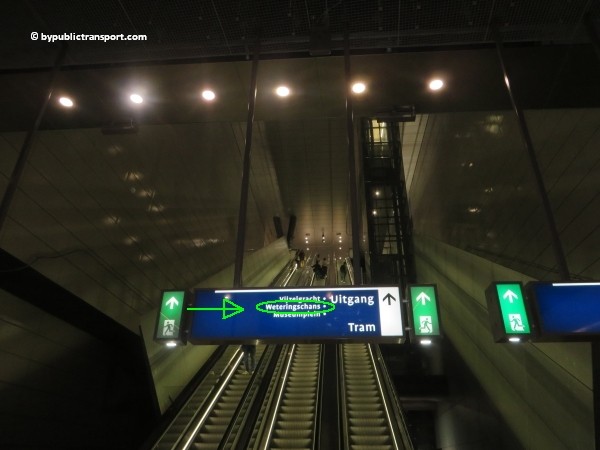 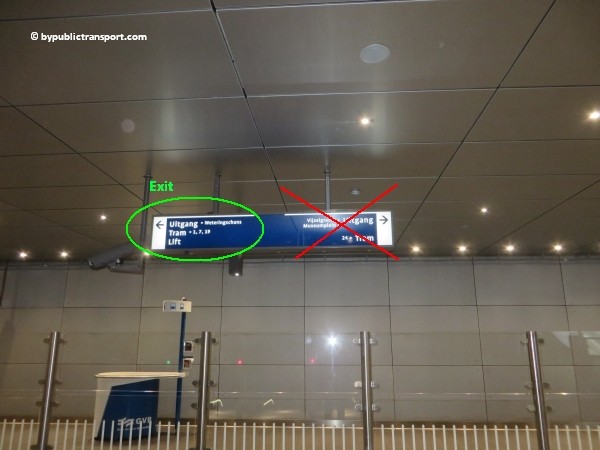 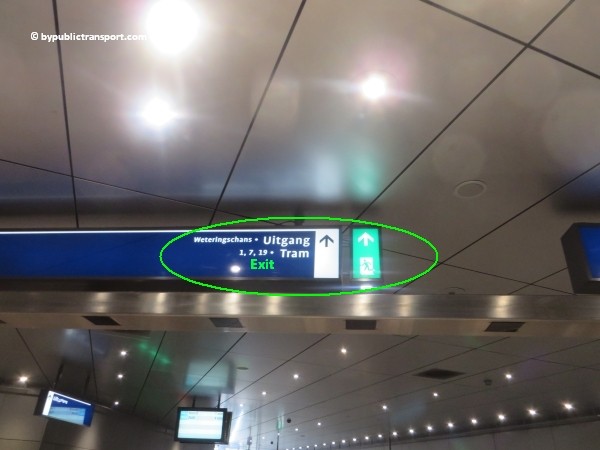 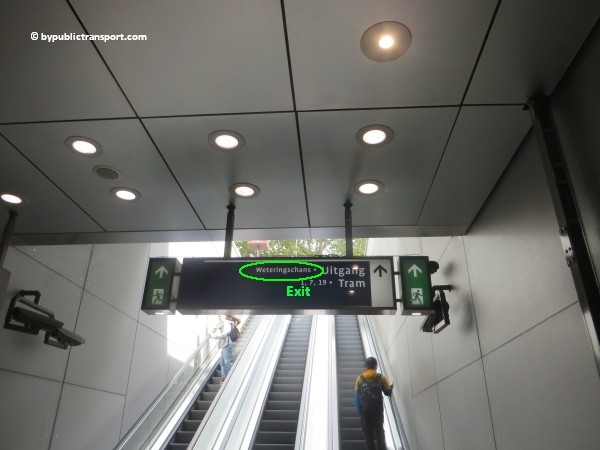 Use the 2 escalators to go upstairs and exit the station. As soon as you’ve left the last escalator, turn to the right. Now, when you look straight ahead, you’ll see the wooden Carousel Pancake House. Depending on the season you might already see the Heineken Brewery or it’s flat roof behind the Pancake Restaurant. Walk in the direction of the wooden pancake restaurant crossing the small streets and bicycle lanes by using the pedestrian crossings. Be careful, bicycles in Amsterdam usually come from all directions. They might ring their bicycle bells, but usually don’t stop and might kill you. 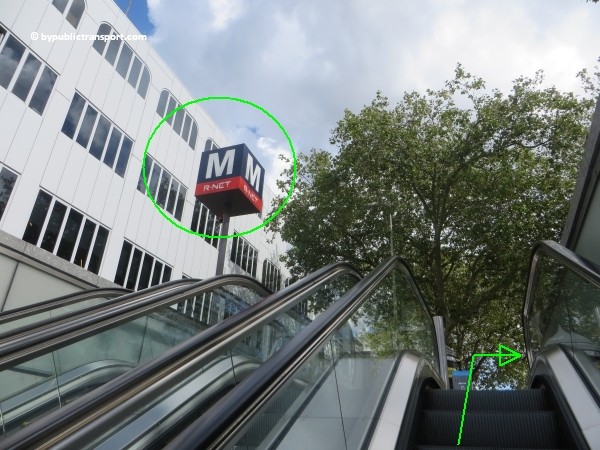 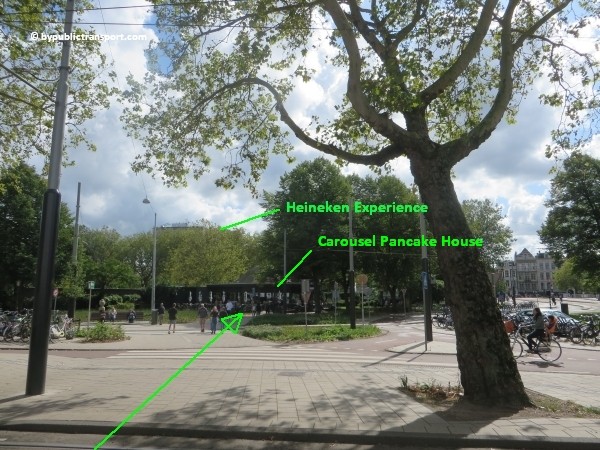 Now it’s just a matter of following the sidewalk to the Brewery. Just before the bridge in front of the brewery, there’s often a hot dog cart. 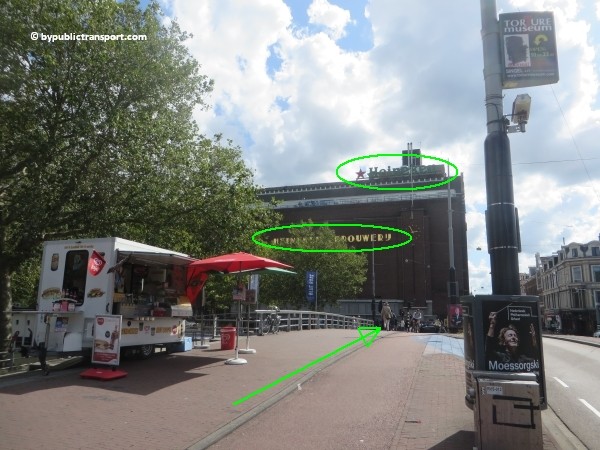 Use the pedestrian crossing to cross the Stadhouderskade. Take your time and wait for the green pedestrian light, as this street is usually very busy. As soon as you’ve reached the other side, you follow the brownish brick façade of the former Heineken brewery to the left and walk to the entrance of The Heineken Experience. You’ll probably see the lines near the entrance. To avoid long lines and save € 3,– per ticket, book your tickets online and in advance. 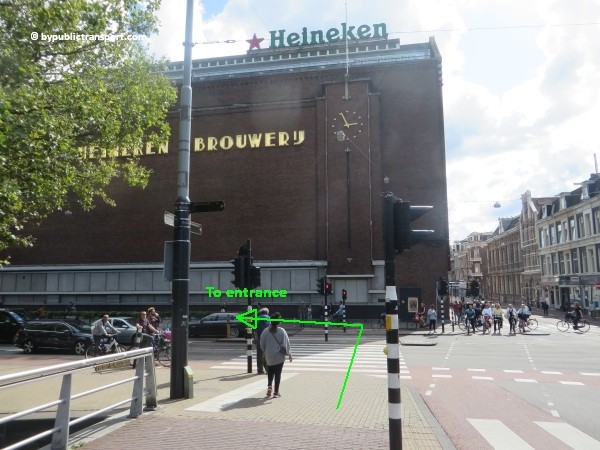 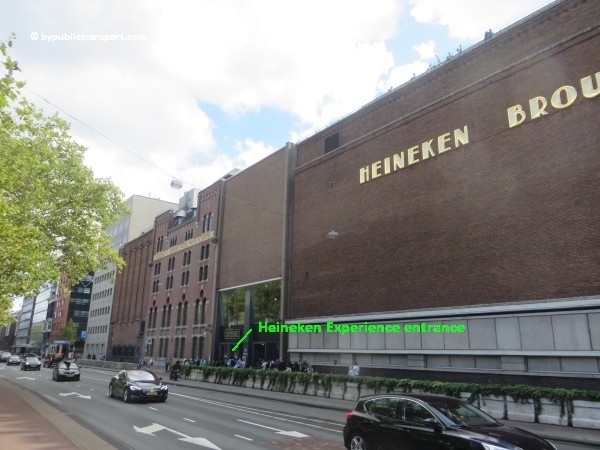 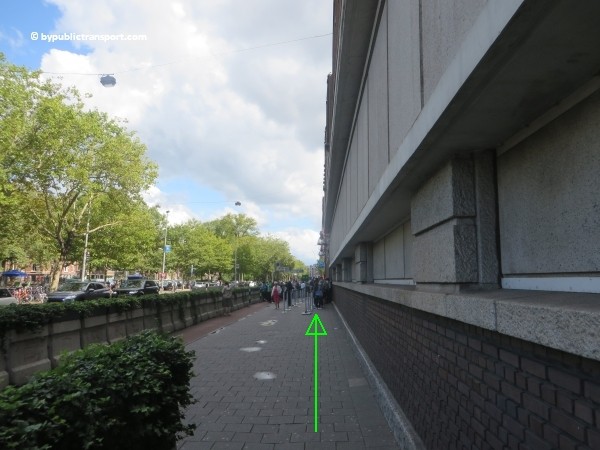 When leaving the metro train, follow the signs pointing to Uitgang (Exit) Albert Cuypstraat. Use the 2 escalators to go up and leave the station. As soon as you’ve left the metro station, you turn to the left in direction of Ferdinand Bolstraat (this is just 30 meters from the exit). At Ferdinand Bolstraat, you turn to the right and follow the small sidewalk in northern direction. You might see The McDonalds Restaurant on the little square opposite the street and Tram 24, going north to Station Amsterdam Centraal, or south. The Heineken brewery is at the corner of Ferdinand Bolstraat and Stadhouderskade and is recognizable by it’s brownish bricks. The entrance of The Heineken Experience is around the corner at Stadhouderskade.

Trams
Metro 52 runs between the north part of Amsterdam and Amsterdam Zuid (South) station. If you’re hotel or starting point is in the west or eastern parts of Amsterdam, traveling to the The Heineken Experience by tram might be a good option. There are several tram stops nearby.

Tram 1, 7, and 19
These trams stop just in front of Vijzelgracht metro station (M52) at exit Weteringschans. Leave the tram at tram stop Amsterdam, Vijzelgracht. It’s a 3 minutes walk to the entrance of the Heineken Experience. Follow the directions as described here. 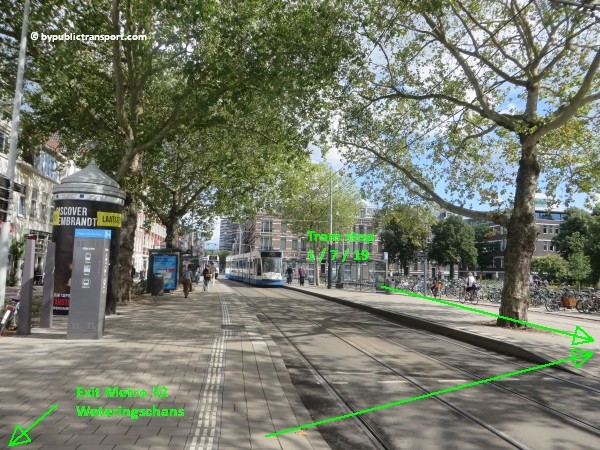 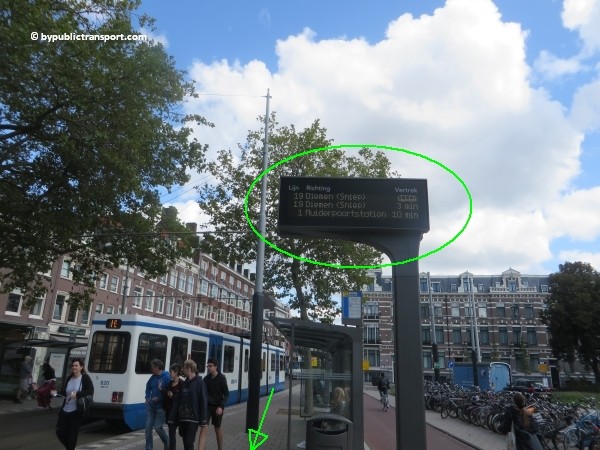 Tram 3 and 12
Tram 3 and 12 both stop just in front of De Pijp metro station (M52) at exit Ceintuurbaan. When leaving the tram use the pedestrian crossing to cross Ceintuurbaan in direction of the metro station (M52). At Ferdinand Bolstraat, you follow the small side walk in norther direction. You pass The McDonalds Restaurant on the little square and you might see Tram 24, going north to Station Amsterdam Centraal, or south. It’s a 9 minutes walk to entrance of the Heineken Experience. The Heineken brewery is at the corner of Ferdinand Bolstraat and Stadhouderskade and is recognizable by it’s brownish bricks. The entrance of The Heineken Experience is around the corner at Stadhouderskade.

Tram 24
Alternatively, you can take tram 24 at the same tram stop at Ceintuurbaan and leave the tram at the very next stop at tram stop Marie Heinekenplein, which is just around the corner of the entrance of The Heineken Experience at Stadhouderskade.

Schiphol Airport railway station
The railway station is beneath the airport. Every 6 minutes, you can take a train to Station Amsterdam Zuid. 7 minutes later you’ll arrive. From Station Amsterdam Zuid, you can take metro 52 (also every 6 minutes) and exit 6 minutes later at Vijzelgracht metro station , exit Weteringschans. From the exit of the metro station, it’s an 3 minutes walk to the Heineken Experience. So, it’s possible to travel from Schiphol Airport railway station to the Heineken Experience in less than half an hour. Click here for further information on this route.